“I live alone, I don’t have a smartphone, nor do I use the Internet. The only thing I do is create. As I have been for 60 years.”

The legend of the contemporary French art scene, Jean Pierre Raynaud is at the center of the new art exhibition at the Dutko Gallery, on Quai Voltaire in Paris (the iconic Parisian gallery has just moved here their new HQ). The show focuses on Reynaud’s iconic series of national flags, accessorized by colorful ducklings. A best occasion to meet the artist, and discuss his unique work and the history of art.

Your new exhibition at the Dutko Gallery, “Childhood as a Weapon”, seems eminently political. Yet you deny it. Why?

When I first started working on flags in 1998, I mounted them on stretchers, like a painter’s canvas. These flags represent the reality of a country. I did not want to intervene on them initially. Art was instantly confronted with reality. It also reminded me of my beginnings, when, without money, I used to dismantle road signs to use them as a canvas! I have been always attracted by the irruption of reality.

Why did you choose this symbol?

Flags synthesize a nation, like no other sign. Colors, graphics, symbols, they summarize the history and geography of a people. Their efficiency is amazing. There is no artifice. It is a universe quite close to mine. I like simple graphic forms and primary colors. I found a natural visual correspondence between this universe and mine.

You refuse to talk about politics even though you tried to meet politicians and country leaders through your work.

Never did I imagine, when I held up the Cuban flag on a stretcher, that Fidel Castro would receive me at his place for lunch. And definitely not with all the pomp and big celebrations that usually come with an official visit of a state leader. But Castro was a man of culture with a keen artistic sense. There was no question of talking about politics. He found my approach interesting and he wanted me to share this idea with him. In the same way, I met Muammar Gaddafi, the deposed leader of Libya. His green monochrome flag, in the color of Islam, was the reflection of the piety he claimed. I found it interesting to talk about this. Then I went to North Korea, where they handcuffed me, as if I was a dissident. They released we afterwards, when I explained my approach: it was never political, but purely artistic. So, obviously, when it comes to authoritarian political regimes, I am often accused of having a fascination for tyrants! This is not true! I spent just as much time with Prince Rainier of Monaco! (smiles) 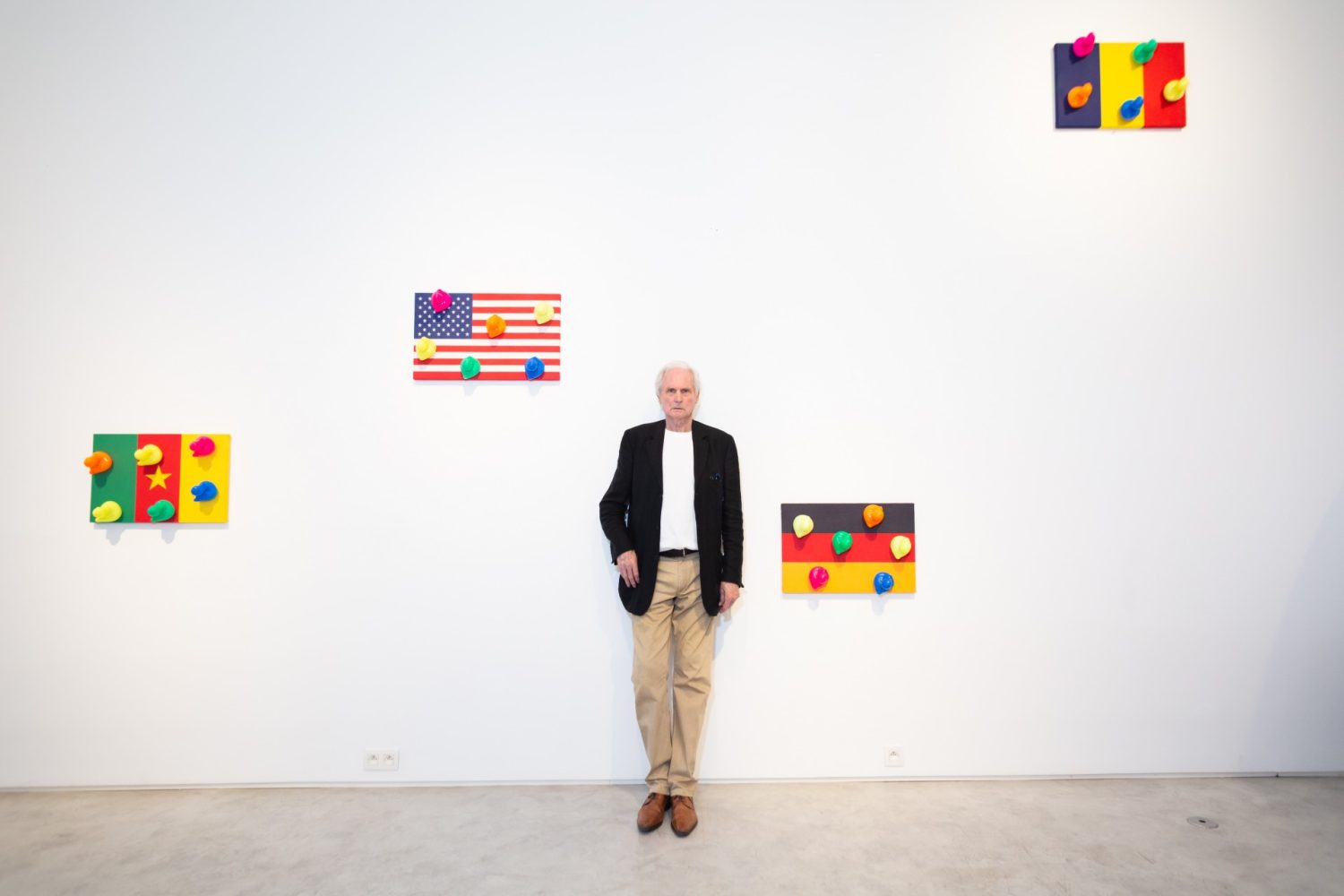 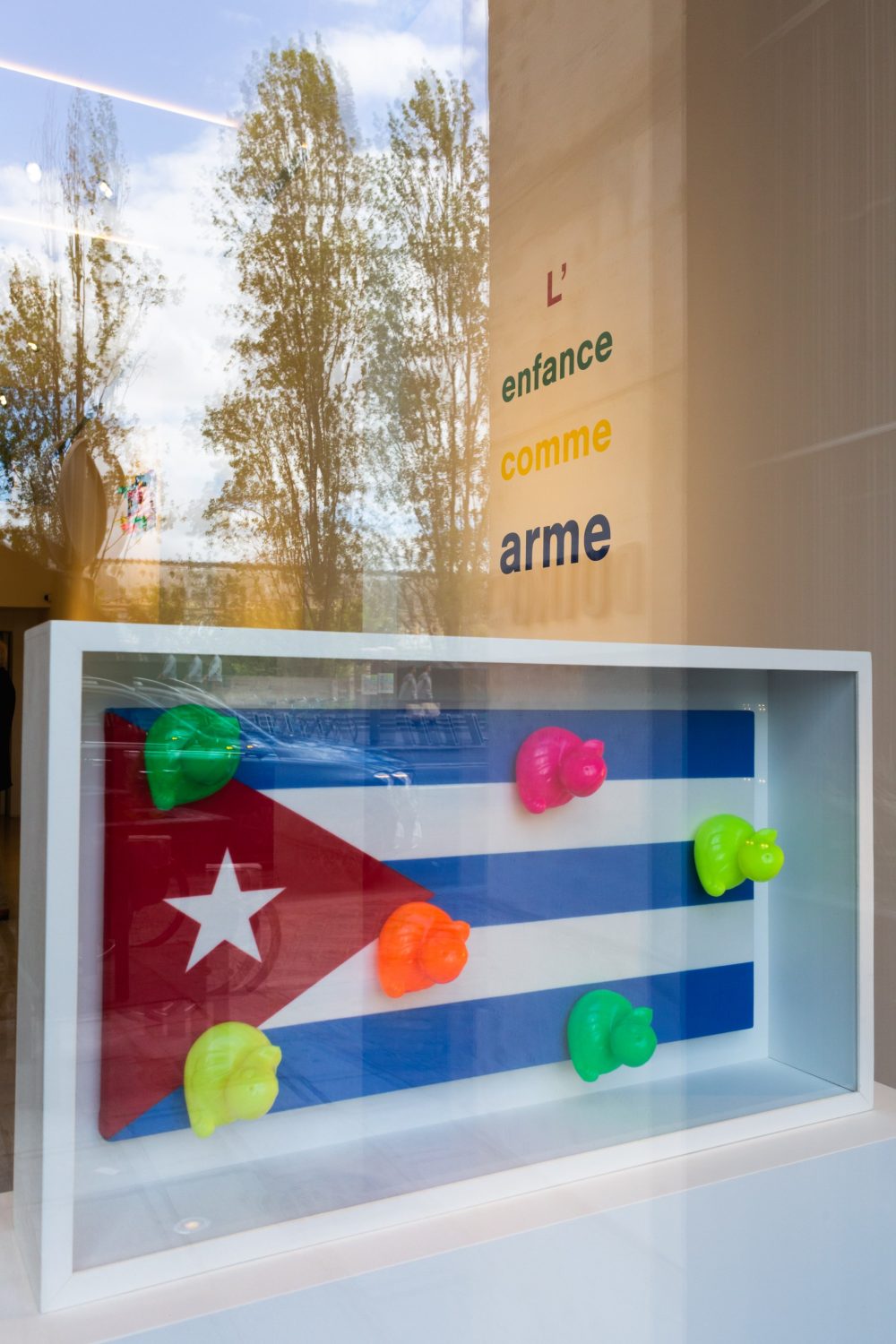 In 2005, you decided to further develop this work, with your signature plastic ducks. What message did you want to convey?

I wanted to put in the spotlight the innocence of childhood, and to show its power over everything else. My series started with the flag of Israel. It seemed to me that the history of this country needed to be shrouded in a carefree atmosphere. This carnival duck, with its fluorescent shades, provided the perfect contrast. Innocence meets reality. I thought of those children’s rooms, where on the carpet, plastic toys remain strewn about. A child’s room is life with a capital L. The contrast, from an artistic point of view once again, seemed interesting.

But it’s not as coincidence, as you say, since all these ducks are strictly aligned in the same direction.

You’re right. Once I found this symbol, I wanted to add a meaning to it. I thought of the flights of migratory birds. Take ducks, or storks, for example. They are all lined up and going in the same direction. Why? Because they hope to find a warmer climate. So I thought that matching the purity of a childlike universe with the hope of a promised land would bring a new life to this work.

Last question, in the light of the current political events, do you think that this work has a much more powerful political aspect?

It’s a stroke of fate! Call it bad or good luck! One part of this work dates back to 1998, the other one to 2005. As for the exhibition, Dutko proposed to organize my solo show based on these works, long before the outbreak of the war. The Russian flag is therefore not in itself more important than any other in my work. And if I could foresee the coming events, I would have definitely included the Ukrainian flag in my show. I could not have forgotten about it! But I have to admit that this exhibition, whether I want it or not, has taken on a very particular significance because of the moment we are living through.