“It’s the connections that we create that are important. Not just with art works, but also with people”.

“I wasn’t always interested in art, but art came to me”, says Ingrid Brochard, who welcomes us in her Mobile Museum (or MuMo to keep it short) in Massy, a traveling art project dedicated to making art accessible to all. But as is often in life, the best things happen when you least expect them. Entrepreneur, collector and philanthropist, Ingrid first built her career in beauty, then in fashion, before finally discovering her true passion: supporting artists and making their work accessible to all, regardless of class or gender, from a very young age. Because in her world everything is possible… Today, with her red and white truck, she travels all around France to meet people, bringing art and culture to those who often don’t have access to it. Strong, purpose-driven, committed and determined, Ingrid is always on the move to push back new frontiers.

Tell us about the concept of the Mobile Museum. How did it change in the last 12 years?

When it all started back in 2010, I had an utopian idea of a traveling space, where works would be created in situ. I set up the project, and Vincent Bolloré was the first patron to finance it. Without him, the MuMo would never have seen the light of day. There was a real social dimension: my idea was to reach out to those who don’t go to the museums at all or who don’t go there very often. At the time, I asked American architect Adam Kalkin to design the first MuMo truck, which traveled everywhere, to Belgium, Spain, Africa… Since then, we have received the support of the Ministry of Culture and that of the National Education, so now we focus more on national trips in France. In 2016, we launched a second truck, designed by Matali Crasset – so with our two trucks we circulate the works of the FRAC (Regional Funds of Contemporary Art, ed.), the CNAP (National Center of Plastic Arts, ed.) and national collections. Finally, the Centre Pompidou contacted us in February 2020, to create our third museum truck called the MuMo x Centre Pompidou. By the way, as I speak, I am in Dordogne, where the MuMo x Centre Pompidou is receiving its first important visit. That of the new Minister of National Education, Pap Ndiaye.

As a child, what was your relationship to art and culture?

I come from a family where the art aspect was not very present. There was not much room for imagination, my parents wanted us to be interested in sports and travel. Later, I was pushed to study business, to “make a career”. I grew up in Gergovie – La Roche Blanche in the Auvergne, and there weren’t really any museums. So I read a lot, and I craved for the Bibliobus to come by, so I could borrow some more books. Even at the time, it was art, well the literature part of it, that came to me. And this Bibliobus experience marked me, that’s also where the idea of the MuMo came from.

To get into art does one have to go to a specialized school?

To be a historian, yes. But there are many other jobs in art: for example, to work in a gallery you need to have a commercial spirit. And to set up art projects in France, you have to know the legislation and how the administration works. Otherwise, it’s like for everything, you have to be passionate. When I was little, I wanted to be a perfume nose. I think that, more than smells, what I liked was the relationship with nature, with plants, with flowers. But my parents wanted me to do a “real job”. I ended up doing business school, and at nineteen I started a cosmetics company. But whatever field I worked in – and I’m extremely lucky – I always wanted to give, to inspire, to help… I did the equivalent of my sophomore year in the US and it was the Americans who introduced me to philanthropy. On weekends, after school I used to go and sing in the rest homes, I also cleaned the streets. It’s important to help others. With the MuMo, it’s the same, it’s a personal project, volunteering, an extra activity that inspires me and allows me to put my knowledge at the service of others.

I often quote Robert Filliou: “Art is what makes life more interesting than art”. One day, after work, I was walking along the Left Bank in Paris, and I walked into a gallery on Rue de Seine. At the time, I didn’t really know what a gallery meant. The artist, Gérard Schlosser, was there, and we had a very inspiring talk! He and his wife invited me to lunch… and the rest is history! Later, when I was already at the Ecole du Louvre, I read Peggy Guggenheim’s autobiography. One passage in particular really struck me. She lent a professor some of Kandinsky’s paintings to share with his students. It was an off-site experience – for which Kandinsky had required insurance – like we do with the MuMo! Before I found my place in art, I simply started collecting for myself the pieces of the artists I love. My collection is private, I hardly show it to anyone. Among my favorites there are many strong women – Louise Bourgeois, Sophie Calle, Sandra Vasquez de la Horra –  of course, but also: Takashi Murakami, Nobuyoshi Araki, Keith Haring, Andy Warhol, Gérard Schlosser, Man Ray, Dan Flavin, Lawrence Weiner, Michelangelo Pistoletto, Hans Bellmer, Jean Dubuffet and Tom Wesselmann, or artist couples like Ida Tursic and Wilfrid Mille. It is the artists who have marked their generation that inspire me. But desires change and recently I have moved from narrative figuration to a more minimal art. 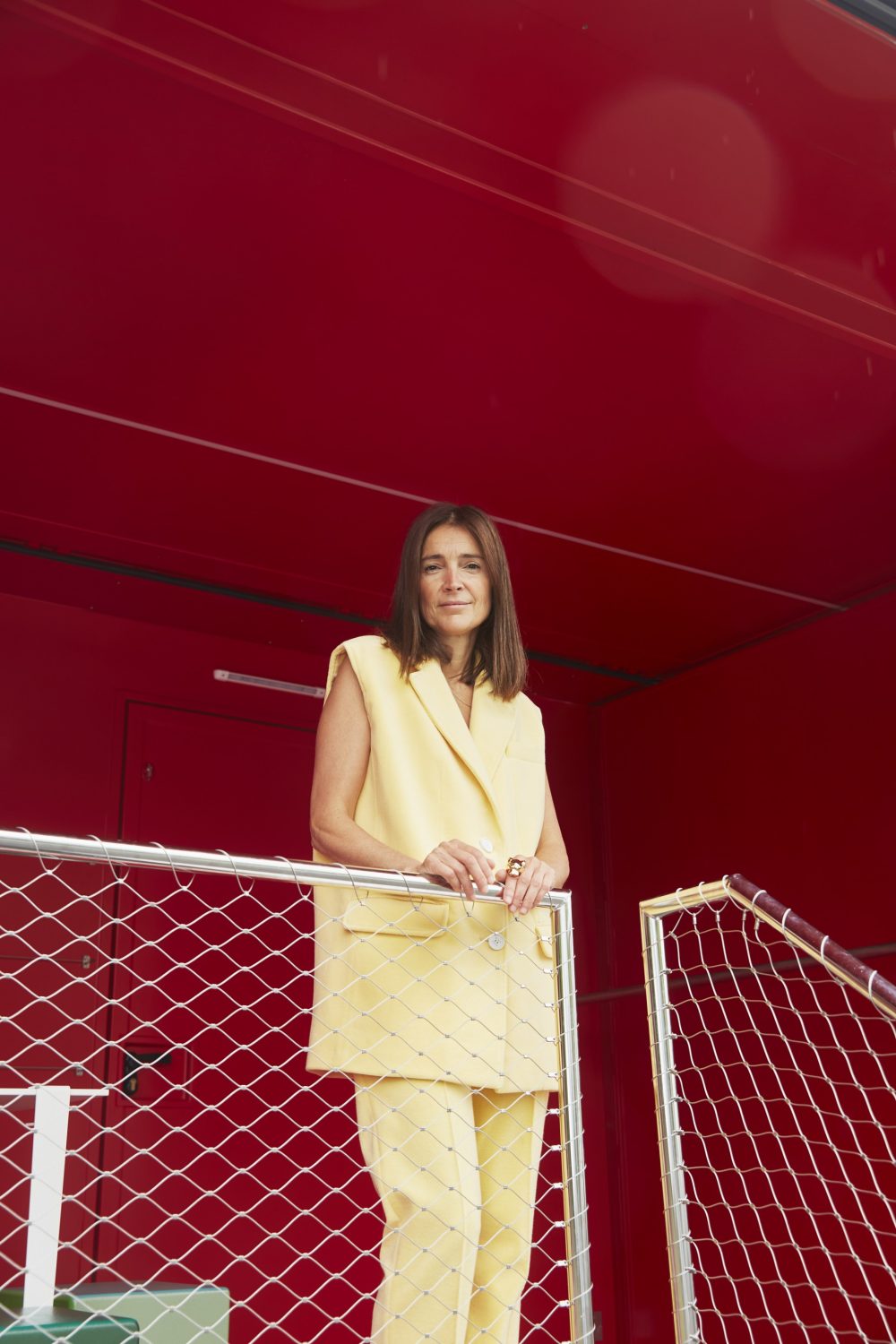 Is the notion of gender still important in the art world?

I don’t necessarily think about genre when I look at a work. I’ve never had any particular difficulties because I was a woman. I don’t look at the gender of the artists I collect, or the ones I work with, and I’ve always considered that mine wasn’t being looked at. I’ve met kind people and I try to be just as kind. I may not be the most committed feminist, but I do what I can, on my level. I am a member of three Parisian women’s clubs, BOSS, LeadHers and Salon 21, which help women leaders build their career paths. I am a feminist, but I like working with men too. I am comfortable in this male world. It doesn’t matter if you’re a man or a woman, what matters is the human side.

Do you want to make art accessible – but not just to children?

Exactly! Our trucks also travel to hospitals and nursing homes. It’s an intergenerational project: we want to break down territorial and geographical barriers, but also social ones, age, gender, class. As for the children, we go to meet them in schools, homes, and day care centers. These are the most formative primary years, when one learns to read, write, count and think. We form their taste, their critical spirit. We have also set up a digital tool, Create your MuMo, which allows children to familiarize themselves with the different professions in the art world, which they do not necessarily know. They have access to the national collections and can create their own exhibition in a fun way.

In France, there is a strong imbalance in access to art between the cities and the countryside. A disparity that encourages inequality. Do you have a solution?

This is a real problem. In Paris museums are not free, which is not the case in cities like London. A nice public policy initiative was recently launched in France, the cultural pass. But geographical and social inequalities are increasing. Massy is not far from Paris, and yet it is another world! I hope that public policies will have more impact in this area. I am thinking in particular of Jack Lang, who has constantly supported art and made it accessible to the provinces, he launched the FRACS. Moreover, the MuMo benefits from the support of the government and public aid. There is still a lot to do, but I hope that the MuMo can be part of the solution.

What’s the real impact of your project?

In ten years, we welcomed around 150,000 children, half of whom had never been to a museum before. Two years after the project was launched, the EAC law was passed, and artistic and cultural education is officially included in the school curriculum. It is not uncommon, when working with schools, to find that the most curious and interested children are not necessarily at the top of the class. Thanks to art, teachers rediscover their own students, see them in a new light. It’s also the connections that we create that are important. Not just with art works, but also with people. For example, the children are always happy to bring their parents, who are often afraid of not having the right art “codes”. Bringing your children to the museum costs a lot, it’s a big budget for a family, so I completely understand that it is not a priority for unprivileged or even middle class families. We bring a lot to the people we meet but they also give us a lot in return.

Was your initiative immediately welcomed by the general public?

Yes. I remember when the MuMo had to go to the suburbs of Marseille, the driver was afraid that we would be badly received, he was so scared that he did not want to drive. However, when we arrived, people were waiting for us with hot chocolate. They were delighted that we were there. People are aware that we are there for them, we want to give them something, that if we are interested in them, it’s sincere and we have something to offer.

Do you have a favorite museum? And is there an exhibition that marked you recently?

You’re not going to believe this, but I was nineteen, I had never been to a museum before! My very first museum was the MoMa in New York. It’s great because you can find everything there. I go back regularly and I really liked Marina Abramovic‘s performance “The artist is present”, I even took part in it myself. I also love the Guggenheim Foundation in Venice. In addition to the permanent collection, I was lucky enough to see a beautiful exhibition there this summer that explores the surrealist artists’ fascination with magic. If you are around, don’t miss it.